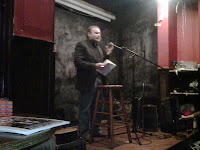 On 22 April 2010 St. Francis College, Brooklyn Heights (NY - 4pm to 6pm), will host in its Maroney Theater (7th floor) readings by some of the contributors to the book Pain and Memory (currently discounted on Amazon). Mitch Levenberg, a writer of existentially absurd stories with a voice that is ironically humorous, is one of those readers. Come to the reading and meet Mitch – start by reading about him here. Scroll down for blog/bios. on the other readers (Lynne Shapiro, Ruth Sabath Rosenthal, Anique Taylor, and Anne Whitehouse).

Writer, essayist, and teacher Mitch Levenberg has published essays and short fiction in such journals as The Common Review, Fiction, The New Delta Review, Fine Madness, The Saint Ann’s Review, Confluence, The Assisi Journal, and others. His collection of stories, Principles of Uncertainty and Other Constants was published in March 2006. He has won two Honorable Mention Awards (2004, 2009) for his essays on his father’s experiences in the Philippines during the Second World War. One of these essays, “Butterflies and Lepers,” was published in the anthology Pain and Memory (2009). He is currently working on a book of poetry entitled, Transformational Love.

Mitch Levenberg has read many of his stories on WNYE-91.5 in New York City and has performed readings at many venues around New York City including the 63rd Street Y, KGB, Hudson View Gardens, Jimmy’s 43, The Brooklyn Heights Public Library, the N.Y.U. Torch Club and others.

The critic Alfred Kazin has said of Mitch Levenberg that he “has the sharp, merciless eye for the hazards that can intervene in the seemingly most innocuous situation. He is utterly fearless in describing the human situation as it is.”

Mitch teaches creative writing and literature at St. Francis College and New York University and lives in Brooklyn with his wife, daughter, and four dogs.
Posted by E♦B at 5:57 AM