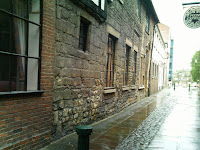 Early in 2009 we set out to publish five, themed literary anthologies – and we have succeeded.
In every case, as per our mission, we have sought to tackle big themes related to the human condition: pain, migration, war, human nature, and faith. In these four years we have dealt with countless queries in thousands of emails. We have read nearly 800 submissions and thousands and thousands of pages. We’ve worked with 63 authors (award-winning, established writers as well as a few first-time writers). Although this has always been a two-person operation, we have had assistance from colleagues and honors quality students. Each project has been different and satisfying. For the recently-published Puzzles of Faith and Patterns of Doubt we published less than 9% of submissions. For the Being Human, Battle Runes, and Common Boundary anthologies we published about 15% of submissions. We held one group reading at St. Francis College (April 2010), have had Nahid Rachlin (March 2011) and then John Guzlowski (October 2011) come and read separately, and just held another group reading (February 2013). In the future, we hope to hold two more readings but have them student-centered. We have had an active web site loaded with profiles, interviews, articles, and a number of book reviews.
We are now able to take a deep breath. But what is next?
As we have periodically added author profiles and interviews to the Bibliotekos site, we’d like to add more. We’d like to have more articles on the site – about authors and books. And we are opening another tab (with a new call) for science writing – not necessarily for any anticipated anthology but to be published on the site.
We are not sure what our next book project is, but we have so far been able to exceed our own expectations. We’d like to spend some time developing material on the site. As you might be aware, one of us is editor of the ASEBL Journal / blog, a scholarly venture, and that requires quite a bit of time and attention as well.
The journey has been fascinating, we look forward to the next phases, and we appreciate your continued interest and support.
Posted by E♦B at 7:00 AM

Your street remembers me like a vein, full of lifeblood- I'm a fighting corpuscle...for you
You have pumped like this for centuries of lives,
Watching us come and leave your bountiful table
Through all our various shades and trades
Sprawling at your feet
Spilling our needs deep into this land.
Your stone remembers me like a house hewn from all that is precious - I am the finest grain of shiny sand polishing my path through your corridors of possibility
Where you've seen history unfold its leaves in terrible directions.
Your waves remember me like a name-giving first bath - I am a magic spell of words...for you
For you are the mother that wakes before all of us
Guiding our dreams to the morning sun calling the changes to the tunes we play
To the rhythm you lay down
Reassuringly, unswervingly
I remember you're the mountain
I remember you're the gold-drenched shore
I remember you're the avenues, the trees
The sum of everything yet to be
Begins with you
I remember you are all our mother
Our mother after all.