We recently had an informal, virtual chat with Danny Cartaina – writer, playwright, and comic. We finally met Danny when he stopped by to visit us at the Brooklyn Book Festival – and we are very happy we had a chance to meet him. Danny’s story in Pain and Memory is quite powerful – about the death of his father, gripping in its detail and wide-ranging in its emotional import – it makes us laugh and cry. As with many of the other writers we have had the pleasure to come in contact with through Bibliotekos, we found that Daniel Cartaina, too, is multi-talented: the evolution of a writer from multiple disciplines. (See, just for instance, Rivka Keren and Muriel Nelson, whose Profiles also appeared on this blog.) Thanks for chatting with us, Danny.

On First Becoming a Writer.

I don’t think I ever thought at one particular moment that I wanted to be writer, like some epiphany that changed the course of my life, a sort of “Where were you when JFK was shot?” moment. I started out in the visual arts as a photographer and later a print-maker. But I think over time I felt that I could not communicate (whatever that would be) with photography. With writing I could create multiple images and landscapes that weave in and out across a story. So, I slowly found myself transitioning into writing over time.

I’ve always been a curious person, especially about life and the human experience which sometimes puts me in interesting places both emotionally and physically. This, combined with an early aspiration to do stand-up comedy inspired me to start writing down my observations on life, usually with a comic twist. Intelligent comedy I guess it would be called, which doesn’t always fly in a comedy club environment.

Where Ideas Come From.

Ideas come from everywhere. But typically if I’m moved by a story or personal experience I find myself wanting to give my observation on it. Other times, when I thought I had nothing in the tank creatively, someone challenged me to write. It could be workshop teacher or a call for submissions might provoke me to investigate. Some of my best ideas come to me at 4am, out of nowhere. This is when I get up immediately and jot down everything that comes out of my head.

On the Elements of a Good Story.

There are many things that make a good story: a strong narrative, character development, but in the end I want readers to be captivated and moved in a way that makes them want to read the next page, and the page after that. I try to be efficient with my sentences, more so if I am writing a play.

Does Creative Work Have (or Need) a Message?

Doing mostly comedy I don’t think I have anything deep that I often want to say. Many times my stories are born from some adversity, or a difficult time, and I often try pull out the absurdity in these moments, something that the reader can relate to so they know at least someone in the world “gets it.” Life is not easy, and if I can bring some laughter to some one’s life that makes me very happy. It is my gift to the world. In Italian they call it a touch of “alegria.”

Do You Write True to Life (Your Own or Someone Else’s)?

Much of my writing is realistic, creative non-fiction. And sometimes it’s fiction that is based on a true story. The theater work I’ve done goes way out there sometimes. In the play “Prosciutto, Mortadella and Ricotta; A Love Triangle” I basically gave Italian meats and cheese their own personality and placed them in a romantic Shakespearean type setting. It was produced in San Francisco two years ago and went over quite well. But to bring this answer back down to earth, the common mantra is, “write what you know”, and I know ethnic, urban neighborhoods, especially Italians. I’ve started characters that I thought were me, but then they blossomed into something beyond my boring life and I enjoyed being them for a while. It makes you want to return to them each day at your desk.

That they were accepted and published, first off. Actually I’m a little surprised at my ability in dialogue when doing plays. It must come from many Italian Sunday dinners.

Favorites (of Your Writing).

I can’t say I have a favorite. But I should say that I have regretted doing a reading of something that was not finished. This happens because I am impatient and I want to get audience response and see how it reads. Sometimes it’s good to do this, but sometimes not. You have to feel it out.

How Do You Work as a Writer?

When I was in Europe I typically got up and wrote between 9am and 12 noon each day. Then I had to take care of other things like teaching, running errands and cooking, etc. If I was lucky I would return to it later that day. That was wonderful! In the United States, it is more difficult, my writing is streaky, due to more demands on time. I don’t like it. I also find that my approach to writing changes slightly depending on whether I’m in New York or Italy. Because you are obviously exposed to a different culture and if your “antennas” are up, paying attention, you will process differently. Lastly, your immediate environment around you is key, whether it be a desk by the window, or on a porch. You have to feel comfortable.

Talk About Your Genre.

I write short stories mostly, both fiction and creative non-fiction. Just started a little poetry. I also write short plays, essays and even flash fiction (under 500 words). The short plays I sort of stumbled on to and I’ve had a lot of fun doing them because you get to see the work evolve in rehearsals. Plus you get to hear the audience’s reaction live. It’s thrilling!

Very often I am reading informational, non-fiction work like Michael Pollen’s “Omnivore’s Dilemma” or “In Praise of Slowness” by Carl Honore. Yes, I am a gardener and foodie to some degree. I am also a news junkie and pay close attention to current events. This is what feeds my writing, my observations on the crazy world out there. It possibly goes back to my early interests in stand-up. Comics are all over current events for their work. David Sedaris is a writer that I like a lot. Spaulding Gray also. Sarcasm is a beautiful thing. When I laugh out loud at something I’m reading and I whisper the word “brilliant,” that is a high compliment from me, because to do intelligent comedy well, the writer really needs to be brilliant.

I recently finished “Brooklyn” by Colm Toibin, a wonderful writer, who really gets into one’s feelings at the moment. Again, a story of Irish emigration from Europe to Brooklyn.

I have some short stories that I’d like to expand further into book length and I’m also getting more involved in playwriting, like short play “festivals,” stuff that has more dialogue in it.
Posted by E♦B at 10:56 AM 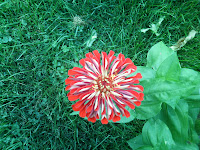 The Midwest Book Review gives Common Boundary: Stories of Immigration a 5-star rating on Amazon and says that the literary anthology is "a thoughtful look into immigration and what it means to be a new person in America. With differing tones and much in the way of thought for the country, Common Boundary is an intriguing look at immigration and provides an entertaining and thoughtful read." Thank you again to our talented contributors and devoted readers.
Posted by E♦B at 7:17 AM 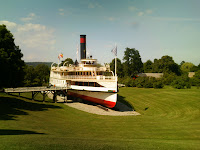 In its September 2010 issue (v.9 no. 9), the Midwest Book Review says that Common Boundary "is an intriguing look at immigration and provides an entertaining and thoughtful read." Truly, it is a fantastic anthology, and again we thank our contributors. We've heard that at least one contributor is using it as a class text (for a college course). Considering the high quality of the collection, we are not surprised.
Posted by E♦B at 2:32 PM