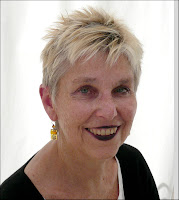 Patty Somlo tells here her story about becoming a story writer – and what a story. We are awakened emotionally and intellectually by what we read in these Profiles. Learning about a writer’s background, values, and beliefs really adds to an appreciation and better understanding of her stories. Patty has a book coming out 15 November: From Here to There and Other Stories (Paraguas Books). Be sure to support writers like Patty and small publishers by getting your copy!
~/\~
In my early twenties, I moved to Albuquerque, New Mexico with my boyfriend, Marshall, who was working on a documentary film, and I started to weave. I had been drawing and painting for years but reached a point where I felt I had nothing to say in those media. The Navajo weaving I saw in New Mexico dazzled me, along with the light and amazing skies and landscape, and I attempted to capture that in some very rough, beginning work.

I was also teaching art at an alternative elementary school in Albuquerque and helping my boyfriend on two documentary films. The second of those films, Warpath Against the Devil, focused on Native American Pentecostal ministers. I traveled with Marshall and the rest of the crew to camp meetings on the Navajo reservation near Monument Valley, where Navajo and Jicarilla Apache ministers preached sermons to the beat of rock music that built to such a pitch that people – mostly Navajo women in their velvet shirts and long skirts – would get up and dance and speak in tongues, eventually falling on the ground and sometimes even fainting. I was so amazed by those experiences, I decided to write an article about it. I never got anything published but that experience led me to want to write more.

I thought the way to write was in a writing-related job, so I gradually worked my way into public relations, and eventually doing PR for a nonprofit organization. My work for The Institute for Food and Development Policy (also known as Food First), got me interested in issues surrounding world hunger and inequality, development and poverty. The organization published books and one in particular – about the dumping of banned pesticides in the developing world – got me interested in doing investigative journalism. I left the organization and started writing freelance articles, mostly investigative pieces, which led to a job as news editor for a weekly newspaper. A number of years later, after a pretty stressful year of researching and writing an investigative piece about the harassment of refugees from El Salvador by the FBI and the possible connections between the FBI and Death Squads in El Salvador, I went back to school and started studying poetry. A year later, I entered a creative writing program and started writing fiction.

Many of the ideas for my stories come from things I read in the news, or rather, my feelings about what is happening in the world, as reflected in the news. The craziness surrounding the debates over health care reform inspired me to write, “Emergency Room,” a story about a group of injured people waiting for medical attention that never comes. Political campaigns were the inspiration for my story, “Candidate of the Third Eye,” about a Gandhi-inspired, Indian-American candidate for governor, whose Policy on Right Living transforms him from a virtual unknown to the frontrunner.

I also get ideas from my own life – mostly from past memories. Having lived in Central America and fallen in love with the people, the landscapes and the culture, I often return there through stories. The landscape in my story, “Bird Women,” which was nominated for the Pushcart Prize, is the mountainous, coffee-growing region of Nicaragua. One of the closest stories I’ve written to my real life, “Even with a Stack of Dollars,” was inspired by my former Nicaraguan landlady’s walking outside on unpaved dusty sidewalks in her backless, gold lamé high heels. My father, who commanded an Air Evac squadron in Vietnam, was the inspiration for my story, “Neither Sweet Nor Sour,” which will appear in the forthcoming anthology, Battle Runes: Writings on War.

I am drawn to stories about people I don’t normally meet in life and places I may never go. The best stories, to me, are ones that take a surprising – and sometimes magical – turn, in which ordinary people, especially the excluded, find unusual ways to cope and survive. Humor is an especially attractive part of good stories, in my view.

Part of what draws me to write is a need to find some hopeful solutions through art to the terrible problems I see in this country and throughout the world. Having grown up in a military family – moving every year or two and living in places from Hawaii to Frankfurt, Germany – I have an odd sense that I don’t really fit anywhere but that I have a connection to all types of people throughout the world. I don’t actually have a message I want to convey in my writing, other than having readers see some of the issues that get so distorted by politicians and the media in a more truthful and compassionate light. I wrote a series of stories, one of which appeared in Common Boundary, that focus on an undocumented Mexican immigrant. As the granddaughter of Hungarian immigrants who were once as denigrated as Latinos immigrants are today, I have a great respect and empathy for immigrants and write many stories about them.

My stories are almost always completely fictional. Some of the settings, as in “The Island,” are mythical places. I rarely am a character in my stories but my views do come through in how the stories play out. In my story, “A Nightly Interruption,” about an unlikely relationship between a Jewish and an Arab man, my view that people can get past stereotypes that cause hatred if they get to know one another comes through. I occasionally base characters – their looks or mannerisms – on people I know. In that story, the Jewish character’s looks are based on a friend and the Arab character’s mannerisms are based on my Turkish hairdresser.

I get up every weekday morning at 5:00 and write. Before I met my husband, I used to make my coffee and write in bed. Now, I make the coffee and write in our finished basement. For some reason, I like to have the light very low when I’m writing. I adore that first cup of coffee (dark French Roast) and love the little cave I feel like I enter when I write, so this is just about the happiest part of my day. After the initial session, I shower and have breakfast, and then go back and either revise a story, continue working on one, or look for places to submit. I’m usually working on several stories at once, and I jot down ideas all the time that I keep in a messy pile on my desk. When I run out of ideas, I pull something from the pile.

When I first started writing short stories, the characters and plots were pretty depressing. I suffered from undiagnosed depression for many years and I see now that my own despair came out in the writing. After years of therapy, meditation and yoga, the depression has eased, and my stories, while frequently focusing on serious subjects, have lightened up, many now including a great deal of humor.

My favorite short story writer and the writer who I think has most influenced me is the late Julio Cortázar. Cortázar loved jazz, and his stories feel like improvisations to me. He had his own style of magical realism, in which he looked at life almost as a child and took situations to their not so obvious conclusions. I feel like I see the world in the same way Cortázar might have seen it, and that might be why I like his work so much.

My other favorites are the Victorians – Charles Dickens, all three Bronte sisters, and Thomas Hardy. I keep saying I’m going to spend a summer re-reading all of Dickens, but never seem to find the time.

My first collection of short stories, From Here to There and Other Stories, will be published by Paraguas Books on November 15, 2010. So, I’m deep into the least fun part of writing – preparing to market the book. I am also working on new stories for a possible second collection. I am hoping to work on a series of creative nonfiction pieces about my relationship to beaches and how growing up as a military brat and continuing to move around as an adult, beaches have been a strange sort of home place for me.
Copyright©2010 by Patty Somlo
Posted by E♦B at 9:58 AM