Interview conducted and written by Chandra Persaud
~~~~~~~~
Levenberg is "A combination of Woody Allen and Franz Kafka." (Gregory F. Tague)
~~~~~~~~

The journey begins when the cover is pulled back and you land upon a page with a title that leaves you eager for more. Then, in just a few sentences you find yourself captured in a world of dilemmas, secrets, and tales as though these characters opened their doors and allowed you into their homes. “Welcome to the strange world of Mitch Levenberg.” The mixture of humor and surrealism, all compacted in a few pages, will either leave readers speechless but with a smile upon their lips or puzzled about the underlying meaning of the work.

Even before the tender age of 10, Mitch knew he wanted to be a writer. Enamored with George Washington, Mitch’s earliest memory of his writing was a biographical piece he wrote about this founding father. It’s not surprising that Washington was this author’s first subject given the fact that his father was, what Mitch calls, “an amateur historian.” His father loved to read and while he never read aloud, he would share his new discoveries with Mitch. “I remember my father being so focused upon what he was reading that he would block everything else out…I always thought he should have been a history professor and not a podiatrist,” laughs Mitch.

Growing up, Mitch kept much of his writing exclusively for his eyes. Perhaps, it was because “I was a little shy or embarrassed and so I never really showed my parents my work,” says Mitch. He also explains that conventions at that time did not consider writing as a career. “When I was growing up writing was viewed more as a hobby and an emphasis was placed on finding a real ‘job.’” While Mitch was very secretive about his writing in his youth, he did allow one person to enter the realm of his thoughts. Mr. Piorkowski was Mitch’s 9th grade English teacher and “was the most encouraging and supportive” individual of his writing at that time. It was in his class that Mitch wrote his first official poem, verses describing what the world would be like 10 years down the road. The assignment sparked a deep interest in poetry and soon Mitch went out and purchased a composition notebook, jotted down about twenty titles, and then created a poem for each title. It was here, at the age of 14, that Mitch realized he “wanted to be a writer more than anything.”

Mitch says, “Writers usually start out imitating other writers” and he was no exception. At the age of 10, Mitch found Harper Lee’s “To Kill a Mockingbird” riveting. In fact, Mitch engaged in a “reading race” with a fellow fifth grader, each reporting to the other how many pages of the book he completed each day. Although he cannot remember who won that race, Mitch was extremely impressed with “To Kill a 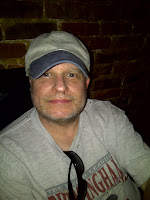 Mockingbird” and was amazed that it was possible to configure such a plot. “That is perhaps my earliest memory of being inspired,” he says. In college, Mitch drew inspiration from writers such as Samuel Beckett, Harold Pinter, Anthony Burgess, Franz Kafka, and Ernest Hemingway. While all these writers had a significant impact on him, Mitch identifies deeply with Kafka’s style of writing as well as his personal life. “I felt connected to him [Kafka] especially as a very young man from a Jewish family living in a big city, feeling alienated, having a dark vision of the world, a sense of foreboding, and yet personally [being] a prankster, a self-anointed comic, always maintaining a sense of humor, a sense of the absurd.”

Writing soon became much more than a hobby for Mitch. As he matured, Mitch realized that writing satisfied a deep yearning for expression, for human connection, for escape. Mitch describes his writing as an act of “submersion,” drowning in a world of characters that often experience circumstances that he knows all too well but who can sometimes take him to places he has never been. “Sometimes new emotions come up through my characters without me really knowing they are going to,” says Mitch. While he may know the ending of a story or have a good opening line, the journey before or after those points (respectively) is quite unknown to Mitch until he actually sits down to write. This unknown, this mystery waiting to be solved, is perhaps one of the most thrilling (and potentially frustrating) experiences for a writer.

In 1988, Mitch became a published author for the very first time. “The Cruller,” a short story surrounding a coffee shop whose balance is maintained by this pastry forever staying under a glass bowl, was published in Fiction. “The Cruller” conveys the message that change can sometimes be an upsetting factor in our lives; we are more comfortable, happier, with the known. While we may yearn for some kind of excitement, when our routines remain the same they bring a sense of serenity into our lives. His first published work gave Mitch a sense of joy and pride so much that he decided to drop out of graduate school (he would later return). “Whether or not it [his decision] was a mistake, I don’t know,” laughs Mitch, “but I always believed I would write the great American novel and who knows… it’s still not too late.”

Of all he’s written, Mitch’s favorite work is “The Cruller.” This may be so because it is the first work he’s written that was published and so he has a special fondness for it. Yet, another reason he feels connected to “The Cruller” is the fact that the short story is a reflection of a phase in his life. “In just a few pages it sums up what I thought about life up until that point,” Mitch explains. “The Cruller” is not the only story that made his favorite list. “Some stories I’ve grown to like” says Mitch. One of these stories is “Dyspnea,” a short story that has become much more meaningful to Mitch over time. The story follows a young woman, Dyspnea, who suffers from a breathing difficulty. However, Dyspnea’s life is about much more than just slow speech and gaps of silence. Her shocking past is revealed to her new love interest, the narrator, when he and Dyspnea attend Thanksgiving dinner at her parents’ home. “I love that story because it has become more profound to me as I’ve gotten older. I used to think of it as dark humor and while it is that partly, it has really become much more than that. Now, I always tend to get choked up towards the end,” Mitch reflects. Another story that hits home for Mitch is “Vigo,” a tale based on an actual bus trip Mitch and his wife took from Portugal to Vigo, Spain. These stories and others appear in Mitch’s anthology of short stories Principles of Uncertainty and Other Constants.

Mitch is also proud of the work he’s done where the subject is his father. A World War II veteran and voracious reader, Mitch’s father has been a source of inspiration for some of his non-fiction work. Originally named “My Father’s Stains,” but renamed “At My Father’s Table” for publication in the Common Review, Mitch says that the short story derives from him observing his father read at the dinner table. With a glow in his eyes and occasional laughs, Mitch recalls how his father would eat and read simultaneously, leading to his books being forever scarred with food stains. “When my father passed away a few years ago, I inherited all of his books. It was comforting to go through them and see the collection of food stains, mostly from meat sauces, he left among the pages.”

When he is writing, Mitch does not have a specific routine or habit. In fact, the author works best with positive stimuli or noise. “I find it difficult to sit down at a desk in a quiet room and write.” Some of his best work was produced sitting in the main office of a departmental division at NYU, surrounded by students, faculty, and conferences. Mitch likes to have music playing in the background when he is writing, and his favorite lyrics come from Bob Dylan. “He has been a tremendous influence on my writing, especially my poetry while I was in college.” Mitch even does some “BlackBerry writing.” While walking his dog, Mitch will spontaneously jot down some ideas or lines for a story on this gadget, occasionally “making sure my dog is not jumping on any joggers.” Mitch sums himself up as “the kind of writer who likes to close the shades while writing and only see the beautiful view behind the shades when I’m finished writing.”

Although Mitch does not know what genre his work falls under, he knows that his writing style differs vastly from a New York writer. “I don’t write very realistic stories with a lot of description and really complex relationships. I try to write sudden or flash relationships…I try to conflate life as much as possible…I try to create a unique world” explains Mitch. “I would say my writing fits under the quirky genre, if there is such a thing,” he laughs. Mitch also believes that his voice is an important vehicle that gives meaning to his work and which ultimately affects the way his work is interpreted. That is why Mitch loves every opportunity he gets to read his work to an audience.

Mitch hopes to share some humor with his readers and listeners. He believes that is it very important for each of us to accept and appreciate the humor and absurdity in the world. He thinks that a sense of humor makes living in this world much easier. “If we want to live and survive in this world, we have to know how to laugh,” says Mitch.

The author is currently working on a play that he started this past summer. Entitled Ellipsis, the play is based on “a series of interviews with a woman of power who becomes involved in an ‘elliptical’ relationship with her interviewer,” explains Mitch. While he finds writing a play to be more difficult than writing a short story, he is enjoying the challenges and rewards of the process.

When he is not writing for his blog, mlevenberg.blogspot.com, Mitch is rewriting or revising work that he has put aside. When he is not writing, Mitch says he is “agonizing about not writing” and when he is not agonizing, he enjoys reading and playing with his dogs. Mitch says he would have loved to be an actor or stand-up comedian, but he is more than satisfied with life as he knows it. He currently serves as Director of the Academic Enhancement Center at St. Francis College and teaches writing there as well. He lives in Brooklyn with his wife, whom he calls one of his biggest fans and “loving” critic, and his daughter who at this point seems “more interested in math and science than writing.”

As for his advice to future writers, Mitch says “keep writing. Don’t ever give up, don’t ever get discouraged....be true to yourself and be honest about what you write…and always bring a pencil and pad or BlackBerry wherever you go,” smiles Mitch.

Copyright c. 2010 by Chandra Persaud - cannot be used without permission.