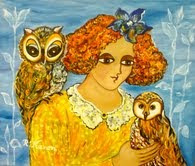 When we decided to venture into the realm of book publishing, we were alone; now, we are fortunate to count among our friends thirty-three extraordinary individuals – writers of exceptional merit whose work is good - worth reading and thinking about. In fact, we find ourselves talking about the characters of these writers, especially Rivka's characters. Rivka Keren is one of those authors, and we asked her to write a profile about herself so that we could all get to know her a little better – where she came from as a person and a writer, and where she is headed. Among other things in this profile, Rivka comments on the contributions she made to Pain and Memory ("Aisha" and "Kiribiri") and Common Boundary ("Islamorada" and "They Set Sail in Springtime"). Note: the profile and associated images are the copyrighted work of Rivka Keren and cannot be used without her express, written permission: first painting is entitled Girl with Owls; second is entitled Via Dlororosa; third is entitled Painter and His Family Arrive at Jerusalem. We are sure you will enjoy Rivka’s story of herself as much as we have.


“I am a Hungarian born Israeli writer, currently residing in the United States” – people raise an eyebrow when they hear that. This is over the top for them. For me, this is simply an inevitable way of existence. Hungarian is my native language. Hebrew is my adopted native language in which I write. English is a huge bonus. Hence, my life-long duality is being Hungarian and Israeli at the same time, which is a source of constant tension and spiritual wealth.

My world has been always divided. I was torn between two identities, two beloved languages, two landscapes, two different sets of memories. Writing in Hebrew and still dreaming in Hungarian became an unequivocal reality. “Am I different?” This question couldn’t be answered easily. Naturally, like many other immigrants, I was living in both worlds. Additional pain came from my desperate attachment to the subtleties of the Hungarian language and the fact that I was cut off, at the age of ten, from the literature I adored, before being able to read in my new language.

Identity, duality, memory, belonging, moral conflicts and dilemmas, as well as the puzzle of human nature, became the main issues of my writing. I was born into a complicated, intensive reality and felt an obligation to commemorate it.

In one of my first memories I am about five and I am alone in the Greatwood (Nagyerdő) at the outskirts of my hometown Debrecen. Mom and Dad are out of sight. The bush seems dangerous and threatening, the nearby lake murky and bottomless. I feel abandoned, terrified, yet curious and high-spirited; an inspirational moment. At home, I make a series of drawings about a little girl standing on a bench, surrounded by huge trees and flowers while her parents are moving away from her. This is my first story in pictures and many others will follow it because painting would become an essential part of my life. Many years later, I am embedding this scene as a dream into one of my novels, and paint it once again.


Thus, a sense of loneliness and insecurity mark my early life. 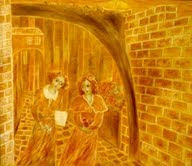 I witness a silent agony at home. I hear whispers about the horrors of the Holocaust, the death of my baby brother from starvation in the Ghetto, the miraculous survival of my father who returned from the camps thin as skeleton and all the relatives who perished. When I enter school, my “otherness” becomes obvious; I am a Jew in an intolerant communist society, bullied and looked upon as part of an undesired, inferior minority. I experience open anti-Semitism on a daily basis.

It is no wonder that I find solace in painting and literature. I spend a lot of time daydreaming, making up stories and reading obsessively; my first favorites are Robinson Crusoe, Gulliver’s Travels, The Jungle Book and all the novels of Jules Verne available in Hungarian. Since my Dad is also fond of Verne, we share long talks about the wonderful adventures and discoveries in the golden titled books of the French writer. We live in a cage, and we are eager to fly away.

When I am seven, I know exactly what I want; to be a writer, to have a sibling and to immigrate to Israel where, hopefully, I will be accepted and loved. By the time we leave Hungary and embark the ship in Genoa, I am crazy with joy; my suitcase is full of stories and sketchbooks, I have a sweet little brother and I am on my way to the Promised Land.

g years are a mixture of financial and existential struggle, assimilation, anxiety, hard work and self fulfillment. The Mighty Duality enters my life. We live in a tiny apartment, have almost no money, yet feel free and believe in a better future. At home, I speak only Hungarian, but slowly I work myself through the many layers of Hebrew and sleep with the dictionary under my pillow, until I am comfortable enough to start writing. Since I set up a very high standard regarding the literary use of the language, I start publishing for children and adolescents when I am twenty, and write my first novel for adults only at the age of thirty-nine. The Taste of Honey (or “Bitter Honey”), Mortal Love and Anatomy of a Revenge are all set against the black hole of the Holocaust, examining the moral choices and integrity of the protagonists in radical circumstances. Texts in my native language and the landscapes of Europe become organic components of the novels. There are plenty of raw emotions, hidden, personal aspects, some torturous and heartbreaking, some funny and magical. The last book I am working on is always my favorite. It has to be an object of dedication and love to keep the fire alive.

Soon I find out that writing is a demanding, mysterious process. No instant reinforcement, no sharing. It is a lonesome affair and it teaches me so much about myself – mostly my need for discipline and concentration, the ultimate self-demand to dive into the souls of the characters, be Them as long as needed, and then be able to emerge and let go. Also, I learn how much I cherish inspiration and how depressing a long silent period can be. The most surprising thing I discover is the flexibility of my memory – the way I store, adjust, repress, reinvent, twist and alter certain characters and events only to be able to write about them with a fearless, open mind. In my case, the story has to be a blend of personal and collective memories, real-life experiences, dreams and imagination, combined with endless subconscious material and put into words in the manner an alchemist might prepare his secret concoction.

The story “Aisha”, for instance, is inspired by a Bedouin woman I met while working as a clinical psychologist at a gynecological ward in a big hospital. “Kiribiri” was born out of a tiny newspaper article about an old woman being abandoned by her relatives at the airport – this sad story made me ponder deeply about old age, belonging, human relations and the unknown dimensions of life and death. “Islamorada” is based on two separate events; witnessing a failed landing of Cuban immigrants on my way to Key West, and an incredible story from an old Cuban man about his relative, a former opera singer and famous Lector of the tobacco factories at Tampa, who fancied mostly Cervantes. (You can read “Islamorada” now, published recently online in Words Without Borders.) “They Set Sail in Springtime,” a self-contained chapter from Mortal Love, is a story inside a story, studded with many well concealed autobiographical details, as it is throughout the whole novel and my other books. Am I there? Of course. Me, my family, and people I knew or imagined, dead and alive, we are all there in a giant group portrait, reshaped, rebuilt, as a genuine example of metamorphosis. All in all, my motto as an author is simple: “Write only what is interesting, compelling, essential to you. If you are indifferent and bored, the reader will probably react the same way.”

There are some authors that had a great influence on me and had shown me the nature of thorough observation. These exceptional thinkers and writers taught me to be sharp and attentive, yet humble while facing the unknown. Based on my interest in the riddles of the human psyche and moral dilemmas, I have my favorites: Aristotle, Nietzsche, Jensen, Dostoevsky, Chekhov, Bulgakov, Melville, Proust, Babits, Thomas Mann, Neruda, Wilder, Kafka, Camus, to mention only a few. Remembrance of Things Past of Proust, The Magic Mountain and Death in Venice of Mann and The Stranger and The Plague of Camus are my lighthouses. Also, I was captivated by the stream of consciousness in the works of Faulkner and Joyce as well as the magical realism and the reoccurring theme of solitude in the novels of Márquez. And I love Scandinavian literature. All those lonely, snowy winters, the endless dark evenings and coffees and merciless insights! They probably remind me of my distant childhood.

Usually, authors can’t read while writing, but I have the privilege of multiple choices, so when I write Hebrew I still can read Hungarian and English. My forthcoming novel, Outrage, is about Mari, a young Yugoslavian woman of Hungarian origin. She is a victim of the atrocities of the recent Balkan war, trying to find new love while fighting uncertainty, betrayal, lies and family secrets. Through her story and the research done for the novel, I became very involved in the history of the Balkan States. So, right now I am reading in English the breathtaking, monumental, 1150 pages long masterpiece of Rebecca West, Black Lamb and Grey Falcon, capturing her journeys through Yugoslavia on the eve of WWII. The second book I am reading on and off is The Adventures of Ibn Battuta: A Muslim Traveler of the 14th Century. Imagine being on the remotest roads of the East in the Middle Ages for thirty years! In addition, I am rereading the last, utopist novel of Mihály Babits, Elza the Pilot, which I am planning to translate from Hungarian to Hebrew.

The new novel I am working on now, goes back and forth between the present and Rome of the first century. It is a metaphysical story, involving enigmatic powers, visions, past life memories and journeys to enchanting places. I made several trips to Italy, accompanied by the Letters of Pliny the Younger, to explore all the sites I am writing about.

My working habits are usually the same; from morning till noon and from five to midnight. Sometimes, I work all night long and whenever possible, I write in bed, while sipping Turkish coffee. It is not very respectful, but so comforting. Fortunately, the Muse is still on my side and I am full of excitement and positive energies. After all, who knows how many ancient spirits are carefully watching the developing story. I must stay the course!