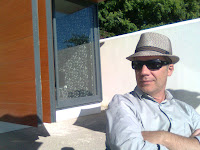 WHEN WE started Bibliotekos one of our friends said that we are crazy; maybe we are, starting a very small literary press these days. But the process of calling for writing, receiving and vetting creative work, and best of all, communicating with and getting to know the writers has been a rewarding experience. We've published two stories by Tim Nees ("Cartography" in Pain and Memory and "Blue Painted Field" in Common Boundary), and, as with all of the writers but one, we did not know anything about him previously. We have since learned that Tim, in addition to being quite attentive to the form as well as to the content of his work, is, no surprise (though it was to us), an accomplished architect. His characters are real enough that we've talked about them after reading his stories. Read more about Tim Nees and his story about becoming a writer, in his own words, right here. You won't be disappointed.

It sounds strange, being called a writer. It’s a concept I’m still getting comfortable with. In 2008 I was a finalist for a sonnet competition. I went to the prize-giving ceremony and there was a nametag waiting for me at the door. It read: Tim Nees Writer. It was the first time I’d seen those words placed together. Although I’m well known in New Zealand for other professional achievements [click to see Tim’s architectural work], I’m not known as a ‘writer’. I kept the nametag and peek at it from time to time to remind myself that yes, I am a writer. Other people have said I am.

I started writing at high school, like many teenagers. Mainly poetry. I was encouraged by two excellent English teachers, friends, and slightly older poets now well known in New Zealand who recited poems at rock concerts and handed out free broadsheets. Then, my friends and I published our own creative writing magazine, Blueprint, but also I submitted work to ‘real’ literary journals some of which, to my amazement, actually published a couple of poems. At university I continued writing but when I made the decision to switch to a Degree in Architecture, writing got shut away in the bottom drawer. Establishing a family, a successful business, and a second career as an art gallery director meant that drawer remained shut for many years.

In 2007 I was prompted to open it and start writing again, writing fiction as well as poetry. I completed a number of part-time creative writing courses, entered some competitions and published a few pieces and now, after three years of writing regularly, I don’t wince when I am described as a writer.

I’m not sure what inspired me to re-open the drawer. Perhaps it was a feeling niggling away inside reminding me I used to write, that I could write well, that I should try again; writing is part of my creativity, part of the jigsaw puzzle that is me, and can complement my other creative practices and not compete with them. It was a time of change in my life, which gave me the opportunity to use the extra time I had in new ways. But once I started, I discovered I really enjoyed the writing process, sitting in front of the computer, letting my mind work its way into different worlds and personalities.

It has never been difficult finding things to write about. Ideas come from everywhere, from observations, interactions, from reading and from movies, from going to an art gallery and thinking about a painting or video piece and the infinite number of social circumstances that may have occurred to enable that work of art to exist, and how that work now affects other people and the stories they take from it. Anything can be stimulating. Stories come from observing people reacting with people, and things, in time now and time past, in reality and memory and fantasy, so that if a diagram were drawn between all these interactions back and forth, even if only two agents were involved it would very quickly become a dense web of possibility. Imagine the interactions of a dozen players and the scenarios would quickly spiral into a mind-boggling mess. A writer’s most difficult task is to decide, choose and edit, to shape possibility, to make something understandable (but not necessarily evident), to make something readable. To know what to conceal and what to reveal. Editing is where the hard work gets done, not coming up with the ideas.

Obviously a writer needs to be able to judge a good idea from a poor one to invest the time in writing, even if it is only a kernel that imparts the feeling ‘I can do something with this’. Then I write and explore and hope it develops into something I can work with or, if momentum fails to build, put it aside and start afresh. The only way I can be sure a story is a good one is if I enjoy reading it, and still enjoy reading it even after the fifth re-write. Then I give it to my partner to read, assimilate her feedback, then let others read it and take heed of their comments. I belong to two writers groups and other viewpoints and understandings (or misunderstandings) can be enlightening. Not that I always agree, of course. My own judgment shapes the final draft.

It is easier to appreciate the skill and craft in other writers’ work, and I read a lot. What I expect most is for the writing to carry me from start to finish and to keep me thinking or smiling or worrying after the last page. It is not ‘the story’, ‘the plot’, ‘the structure’, ‘the characters’, ‘the setting’; it is the writing. It is all of those things set in the writing. Sometimes the writing, the writer’s style, is more or less visible, more or less audible, but it is still there word by word and can either provide the greatest pleasures, the profoundest insights, or the most insufferable irritations. Not that a story need provide insight or expound themes with a capital T. But I hope a story might provoke a genuine reaction from readers; that’s goal enough. And that they may enjoy the language in the process.

Language is what sets a story apart from reality. A story is an imagined or reported series of events presented in words, a constructed convention distanced from reality or concrete experience by the history of words. A story is an elaborate artifice. Elements found in my stories may be based on my experience, or my knowledge, or on hearsay or research, but they are only fragments scattered through the whole. Writers write about what they don’t know as well as what they know. Invention, and convincing invention, is the challenge and the reward. Reportage wouldn’t hold my interest for long. One of the greatest challenges of invention is to construct another person, a character, to sit inside their head and see what they do, to predict what they think, what they say, what they don’t say. I suspect this is achieved more through empathy than insight. And acting. Convincing acting. In my story ‘Cartography’ for instance, I had to imagine myself as two quite different female characters, two distinct voices, and how they might interact with each other.

The act of writing fiction is, therefore, all engrossing and whatever current work is in the document file is the one I favor most. I haven’t had time to reassess earlier work, or rate one against the other. Perhaps the ones that have been published should rate higher, but then those editors haven’t read all my other stuff, maybe I should send all my stories in for assessment. But no, I want to finish the one I’m working on; it’s going well, it might be the breakthrough piece to inspire a publisher to invite me to assemble my first collection. Vanity, the driver.

So perhaps vanity, the promise of pleasure and an overactive mind encourage me to sit down and write. I fit it in where I can, around my other personal and professional commitments. I don’t have a schedule, but a mobile MacBook helps. I’m currently in Europe sharing my partner’s sabbatical leave and in three months I’ve written only a few poems. Starting a story seems impossible, too many distractions and fresh experiences to assimilate. But I’ve been reading, and re-reading, some novels, which is unusual for me. John Banville, Paul Auster, Ian McEwan, Don DeLillo. The DeLillo is wonderful, his short novel The Body Artist extraordinarily beautiful to read. So much of his characters' lives inferred within so few pages with nothing really being revealed, precisely.

When I get back home I’m looking forward to reading and writing, but on what project I haven’t decided. Mostly I want to see my kids, go back to work and earn some money. I have an 80-page novella that needs a lot of re-writing, a dozen short stories that could be brought together with some shaping, but probably a new idea will pop into my head demanding to be written down. I’d like to get something substantial published within the next five years, and continue to publish shorter pieces and poetry two or three times a year. My real goal is to keep the drawer open, to continue writing, so I can confidently call myself a writer.
Posted by E♦B at 11:09 AM