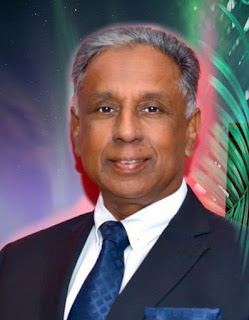 Editor’s note: What follows is a tribute to Professor Kriben Pillay, University of KwaZulu-Natal, South Africa, who passed away in December 2020, from his nephew, Royal Shakespeare Company actor and Fulbright Scholar, Vaneshran Arumugam.

“I have known Kriben Pillay my entire life. He was a storyteller through his writing and teaching, an avid seeker through his study, research and spiritual quest for understanding and self-mastery. He is my mother’s eldest brother and I have watched him since my own childhood in the 70’s, when South Africa was a battleground, as a student, as a teacher, as an activist, as a rebel. The rules seemed to stretch to fit where he was headed. He travelled the world, met with luminaries such as J. Krishnamurti, wrote books and songs, mounted plays and productions, mentored artists and academics.

When days were darkest, with violence in our home, uncle Kriben made it his responsibility to be present. He was a family man and a connector of people and stories, which became apparent at any of the gatherings that he would orchestrate or preside over, a master of ceremony and a Joker extraordinaire.

Articulate and intelligent, his wit belied his consummate readiness to be silly and to enjoy above all the company of children (I was the first, and my own daughter the last in the family to know this)
We riffed together on many ideas and worked together on writing and productions and performances, and I feel that I had a glimpse into every facet of his diamond personality – vast, containing multitudes. He pointed me to Whitman, amongst many things.

Let me point you to him now, his award-winning poetry and writings, his legacy as a teacher and learner, his indelible influence as a father, son, brother, uncle...friend.”

you were always there
like how the moon is

I feel we were always in mid-conversation, few conversations at a time
sometimes few words
looking for a laugh with no excuse
- that irresistible one -
like when a plastic patio chair breaks in super slowmo, delivering a chunky challenger to the ground
or a piece of snot pokes impertinently out of a sincere testimonial’s nose
or, indeed, when a man of esteemed physical prowess trippingly flails his arms at the edge of a wedding stage like the Warner Bros coyote, very nearly almost regaining balance
before taking an almighty backward swan-dive into the grassy deck below, feet in the air.

I wish I could see you watch that moment, because watching you really laugh was a pleasure of the most involuntary proportions and the definition of giddy

We all laughed when you laughed.
by the way, everyone is still amazed by you.
Even if they think they knew the punchline. It hasn’t quite stuck yet that you are light years inside of us now
eternally close
beyond reach

you always hinted at that

times are hard and the chocolates have gotten smaller
and we saw some of the very worst together, arm in arm
father and son sometimes brothers sometimes
but you snuck magic into the jail and it disappeared in the most impossible times

but now is a time for gratitude
as the Phoenix durga rides her tiger into victorious battle against the demon lord and all odds
as the Twofold Tamil Rule in a just world mind rises
as the Cosmic Koeksuster improbably holds to its celestial choreography
and we realise our captaincy
O
great one
you introduced me to the harmonica and telling stories and mastering the Forces
I do these things now, singing my song
they call me uncle someplaces

I was once the apprentice to your sorcery, sir

Like the moon
you are still here even when the sun is out, besieging

dispelling the darkness
when the cool night comes 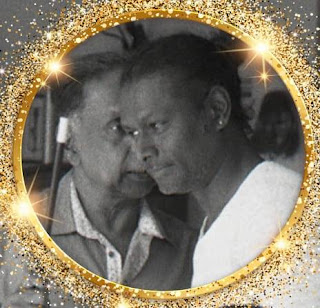 Copyright©2021 by Vaneshran Arumugam. All Rights Reserved.
Posted by E♦B at 7:03 AM