By: Chandra Persaud﻿
On , a small crowd of students, faculty, and members of the community gathered in the Maroney Forum for Arts, Culture & Education at for Nahid Rachlin’s reading from Persian Girls: A Memoir, followed by a Question & Answer session and a reception in the theater’s lobby. The intimate setting was appropriate for a reading that delved deep into the author’s personal life.
Professor Gregory Tague of the English Department at St. Francis provided the opening remarks, explaining that he first came into contact with Rachlin when Editions Bibliotekos, his small family-owned literary publishing company, was searching for pieces to be placed in two anthologies: Common Boundary: Stories of Immigration, published in 2010, and Battle Runes: Writings on War, published in 2011. Stories by Rachlin were published in each anthology, but her work left a lasting impression on Professor Tague and he was more than delighted when she agreed to the reading. Professor Tague then proceeded to give a brief biography of Rachlin including her education at and then at on a Stegner Fellowship as well as her notable recognitions. He shared reviews from prominent literary publications, such as The New York Times Book Review, Boston Globe, and Publishers Weekly, testifying to the value and richness of Rachlin’s work. Persian Girls: A Memoir was chosen by Christopher Merrill, Director of Iowa International Writing Program, as one of the best four books of 2006. 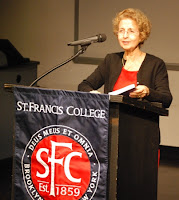